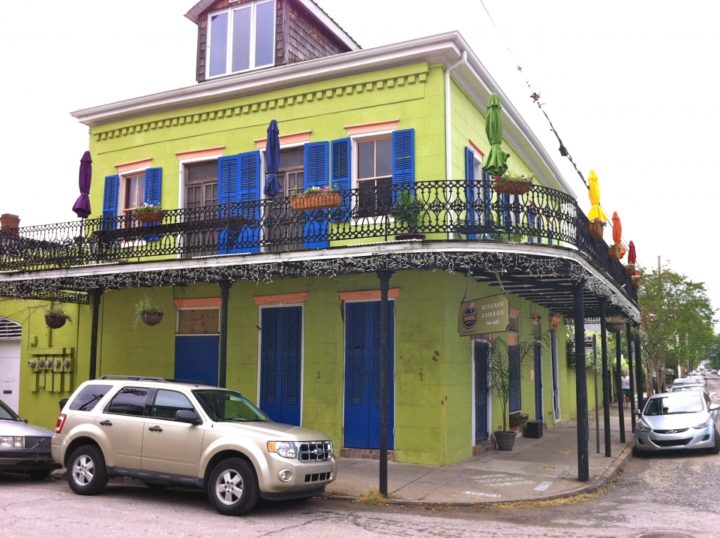 New Orleans is a city of neighborhoods, each with a distinct flavor and character. They’re like art, a totally subjective experience that appeals to what you know about yourself, what you like, and how you visualize life.

The name Bywater may have come from the old “Bywater” telephone exchange coincidental to the area also known as the Upper 9th Ward. Others say it came from a High School student who won a late 1940’s contest to name the area. Bywater has boundaries that run roughly from the railroad tracks next to Press Street, to Poland Avenue, and then from the Mississippi, to St. Claude Avenue.  As The French Quarter became too expensive for the creative types, hipsters, and fans of alternative lifestyles, the next push was into the Marigny Triangle, followed by further expansion across Esplanade Avenue and into the Marigny itself.  Once those areas became too expensive, it was Forward, Ho! into the adjoining Bywater where cheap rents and low cost home ownership were exactly what the doctor ordered.

Both the Marigny and Bywater were once home to a thriving blue-collar community with roots in Germany, France, and Italy. One has only to look at the number of paved over streetcar tracks, (including Desire), beautiful architecture, and substantial churches, to understand just how thriving and prosperous it was. As with many city neighborhoods, that prosperity was followed by an exodus to the suburbs and a period of decline. To say that things have once again changed in the Marigny, and Bywater, is an understatement.

On a rainy Saturday afternoon in the winter of 2007 I found myself with nothing to do. Instead of wasting time watching the tube, I took a ride down yonder to see what all the fuss was about. A real estate friend of mine was kind enough to “show me around” and we looked at  about six homes.  This experience revealed that Bywater was my true vision of New Orleans; artsy, funky, edgy, and a pleasantly imaginative contrast to where I lived. My creative side was magnetized and I have long admired this exceptionally interesting neighborhood.

Fast forward to late 2009, and early 2010. I was representing a delightful young professional couple; who expressed a big interest in The Marigny Triangle, The Marigny, and Bywater. At that time, there were numerous homes to choose from, and after looking at a good number of them they bought a lovely home in the Marigny Triangle. But in the process of showing them homes in all three areas I reconfirmed my affection for Bywater.

Roll the tape ahead to 2015. Much to the very understandable consternation of some Bywater inhabitants, especially those who experienced big rent increases; Bywater had gone through a full tilt gentrification. There are far fewer homes available for sale, and when they come on the market, they don’t last long.  To others, the changes are most welcome and seen as an improvement in over-all living conditions. Bywater remains, above all, a genuine neighborhood. People know one another; they talk to one another on the sidewalks, in restaurants and café’s; on their door stoops, and in some of the very finest dive bars in the city.

There are many good restaurants, long time favorites like The Country Club, Jack Dempsey’s, Bacchanal, and Bar B Que Valhala, The Joint, come to mind. And new eateries are popping up all the time.  Bywater is on the radar of foodies from all across the city, and the absolutely sublime dive bars are too numerous to mention. I will say that Markey’s and BJ’s have their place in my heart.  But each has its own funky character, and they offer true testimony to why people gather in bars to drink and chat. There’s live music at Bacchanal, and at many other locations, and the Music Box Village, an artist driven non-profit organization, features a wide range of critically acclaimed artistic projects.

If you are trying to avoid boredom, think about buying a cool home in Bywater, a neighborhood that is to New Orleans what portions of Greenwich Village is to NYC.  You can reap the rewards of living in one of New Orleans’ most interesting and entertaining neighborhoods, while enjoying your escalating property value in this desirable area.

We love Bywater, and The Marigny too.  Need an agent who really knows these areas to help you buy or sell?  We are at your service.