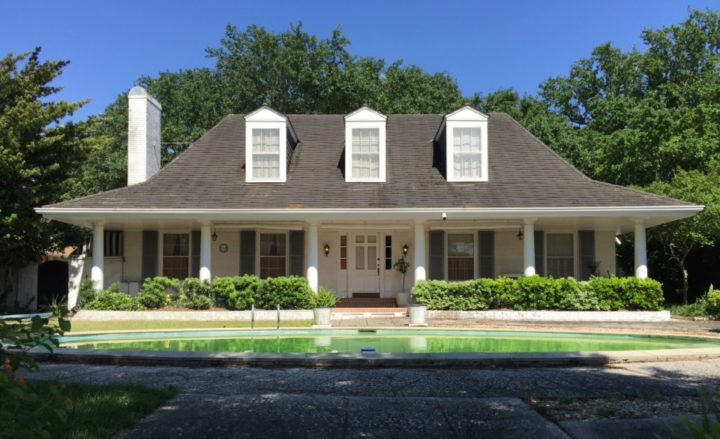 The New Orleans Levee Board, in a project that began in the 1920’s, and was completed in the 1930’s, created Lake Vista, Lakeview, Lake Oaks, and Lake Terrace, all from landfill dredged from Lake Pontchartrain. The protective sea wall that guards all four locations was built at the same time. This area is also known as Lakefront, and was once home to a military installation, now the UNO campus, the famous Higgins Boat works that made landing craft (LST’s), and PT Boats during WW2, and a well loved recreational area, the Pontchartrain Beach Park Amusement Park that closed in the 1980’s.

Large scale building of homes did not start until after WW2 but once completed the collective result was to have created an amazing array of good looking mid century modern homes, some of which have been used in movies. Like most major cities of the era, New Orleans was spreading out, becoming less urban and more suburban. Along with this significant architectural achievement, the migration of families to the Lakefront, and other areas like Kenner, and Metairie, drastically impacted neighborhoods within the city.  This condition is only now being reversed by the increasing desire of Americans of all ages, all across the USA, to live in a city.

Lakeview was the most damaged Lakefront neighborhood during 2005’s Hurricane Katrina. Much of the other areas, built on elevated landfill, remained remarkably unscathed. Now, with greatly improved levees, drainage systems, and pumping stations, this area’s flood risk has been significantly reduced.

As time goes on, many of these particularly attractive mid-century homes have been renovated or remodeled, and they are delightful. In some cases they’ve been torn down and replaced by homes of a more modern design and usually larger size. Lakefront is not designated, (at this time), as an historic area, but it might be something to consider.

Living in any of these Lakefront locations offers a real sense of open space, good looking walkable neighborhoods with tree lined streets and well cared for homes, perceived safety, parks and immediate access to outdoor activities, good restaurants, as well as stores and small businesses of all kinds. In short, it’s a very pleasant and relaxed place to live. And, it’s only minutes from downtown New Orleans.